When invitations to Philip Treacy’s show arrived prior to London Fashion Week, most people asked, “Why?”—why had the milliner decided to stage a runway show at London’s Royal Courts of Justice, and why now?“I had kind of a lot to say,” the milliner points out. “I love African girls, and I love Michael Jackson—he’s the ultimate African-American entertainer. The show was also based loosely on the contrast between white women who come into my shop, try on a hat, and then look at me for reassurance—and black women. They’ll put on a hat and think, I look great! They have a different sense of exuberance, an inner exuberance.”

It was a spectacle from start to finish: Lady Gaga, dressed in a fuchsia shroud that had once belonged to Isabella Blow, opened the show, declaring: “Ladies and gentlemen, the greatest milliner in the world: Philip Treacy.”

An all-black cast of models—including Joan Smalls, under a giant smiley-face headpiece; Alek Wek, and Jourdan Dunn—sported the designer’s wild creations, which were teamed with the original clothes from Jackson’s tours and music videos that Treacy had secured from Jackson’s estate.

The King of Pop’s music also provided the soundtrack to the show, which featured such creations as a gold mask that grew into a tall organic spiral, a silver conch shape that looked like a drop of mercury, a black cornucopia filled with gold roses, a big gold sun that sat in front of one model’s face and what looked like a traditional Thai headdress, covered in a diaphanous black and gold shroud.”It was based on Africa getting rich,” says Treacy of the extrava- ganza. “A future Africa, and they just happen to be wearing Michael Jackson’s clothes. Jackson was exceptional—his talent, the dancing, the image, and I was touched to be able to work with his clothes. They were at my studio for a month before the show, and they were really freaking me out. I’d lift up a box, and there’d be a sparkly glove.” 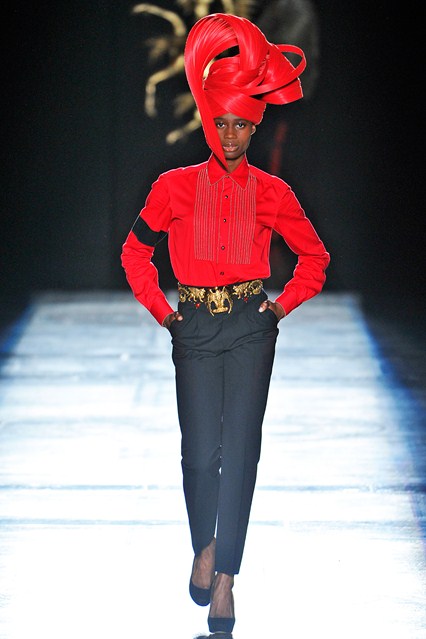 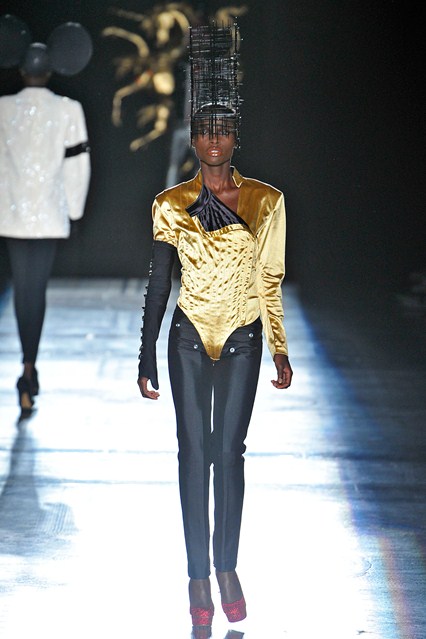 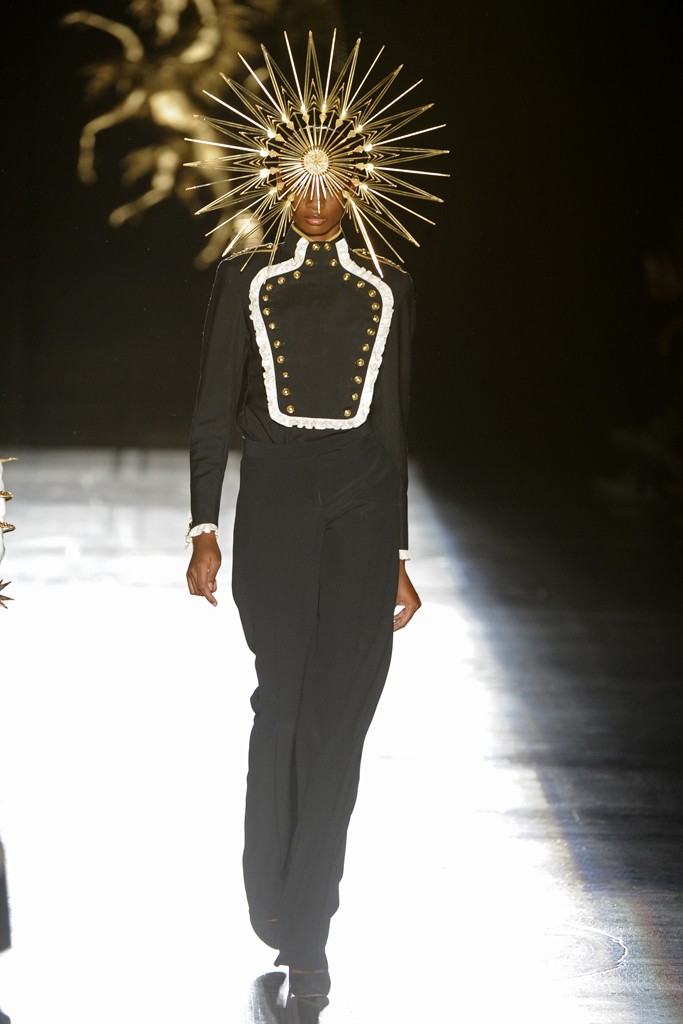 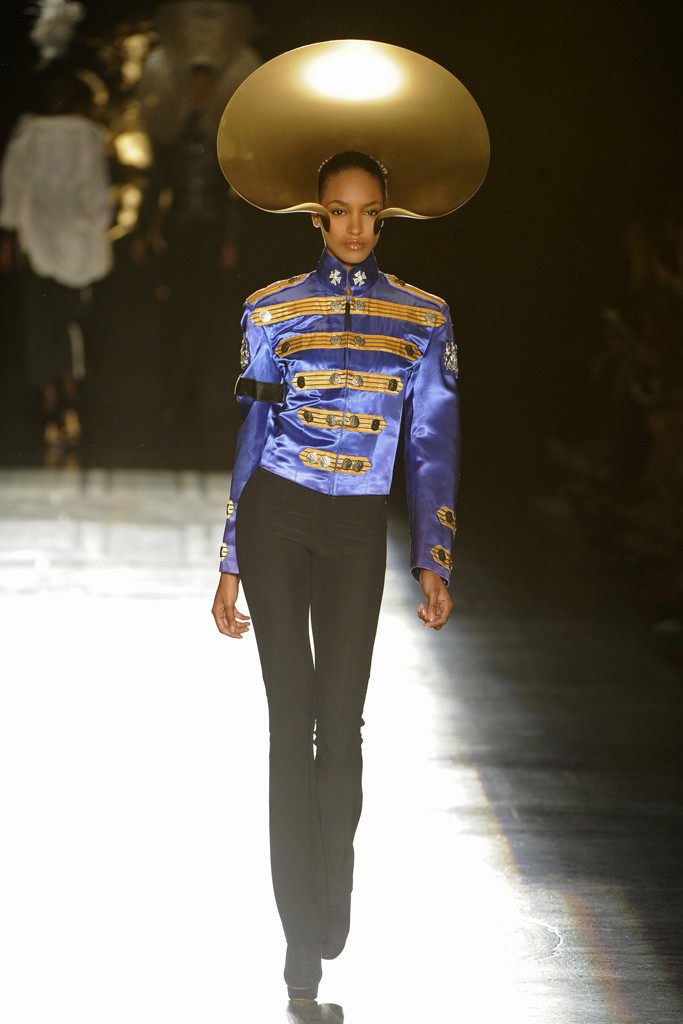 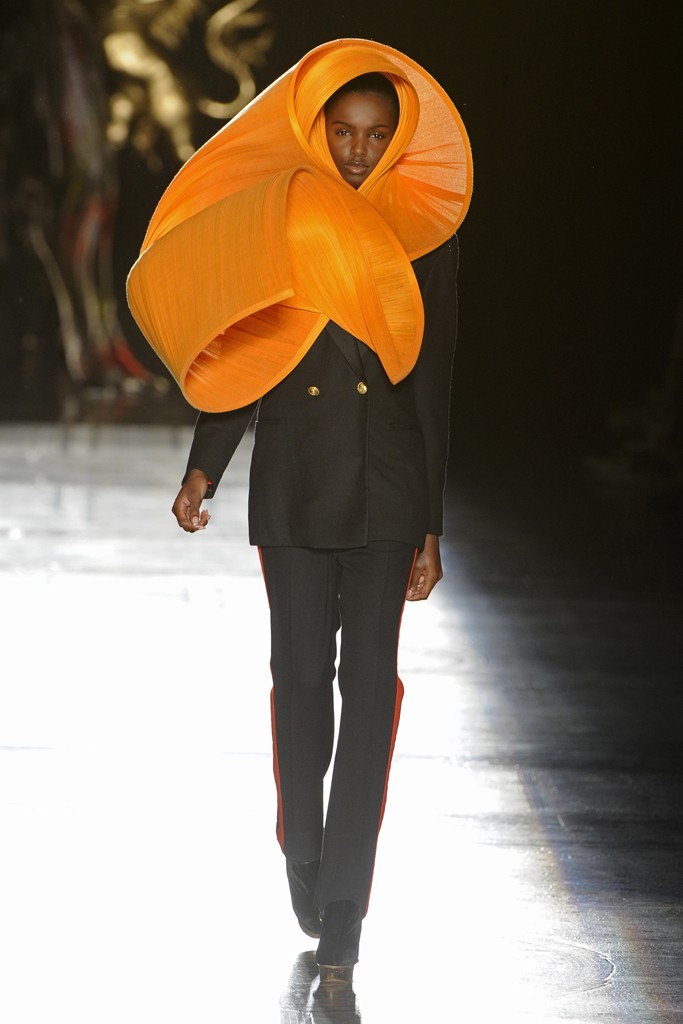 It was an emotional outing—the show was dedicated to his late friends Blow, Jackson and Lee Alexander McQueen. As a gospel choir emerged at the end, there were tears in the front row.

Treacy says he will not be staging a runway show next season, although he hasn’t ruled out more shows in the future.
But he’s certainly not standing still: “I do projects—we’re doing hair accessories in Russia, and I am about to do a movie, which is very, very exciting,” says Treacy, who declined to give further details. It’s understood, however, that the focus is on Blow, a longtime supporter of the Irish milliner.
Asked whether he plans to expand into other accessories categories, such as shoes, Treacy says: “There is a couture audience for exquisite and unusual things. Today, people are much more interested in things made especially for them, at a time of a ‘McDonald’s-ization’ of luxury.
“I could get into all of that [type of business], but I love hats, and am inundated with hat orders. And I have an incredible clientele. Right now, the high-end area of the business is the most prolific, and the core of this business is couture.”