It takes a lot to make Gilles Bensimon nervous. Over the course of his 20-year tenure at Elle, the photographer has snapped many an imposing subject — Madonna, Naomi Campbell, J.Lo’s derriere — none of which have gotten him skittish.

“I was very anxious for this, I must say,” Bensimon admits over the phone on Thursday, calling while on vacation in Biarritz, France. The photographer’s jittery streak was triggered by his new exhibition on display now in London’s Hamiltons Gallery titled “Watercolour.” It’s no misnomer. For the series, which Bensimon has been developing for the past two years, the photographer submerged freshly cut flowers underwater, taking close-up shots from above. The result is a mesmerizing, painterly composition. Flushes of magenta, swirls of citron and inky blurs of violet imbue into each other through the watery filter, sunlight shimmering off its surface, rendering a glossy, almost surreal image.

Well-known for his figurative output, the series marks a departure for Bensimon, his first venture into fine art photography. Hence, the anxiety.

“I was anxious because when you’re a fashion photographer and you do something like this, you can be perceived as someone who wants to become an artist, which I am very uncomfortable with,” Bensimon says. “I grew up in the art world. My mom was a painter, my father was in the art business so, for me, an artist is not simply one who has passion for museums and couture.”

WWD: What was the genesis of this exhibition?
Gilles Bensimon: I’ve always been obsessed with water, even in the fashion pictures I’ve done. I swim every day. I spend so much time in the water, some days four or five hours. And I’ve also always been passionate for flowers. I love gardens. So the combination just seemed natural for me, but I didn’t think of it until I went to Malaysia. I was in this very remote part. It took me three planes and a bus to get there. It’s tropical and it was raining so much. I realized all the flowers there were in this cycle; everything dying was regrowing. Even when we had one flower dying, we had another one born there in the same place. 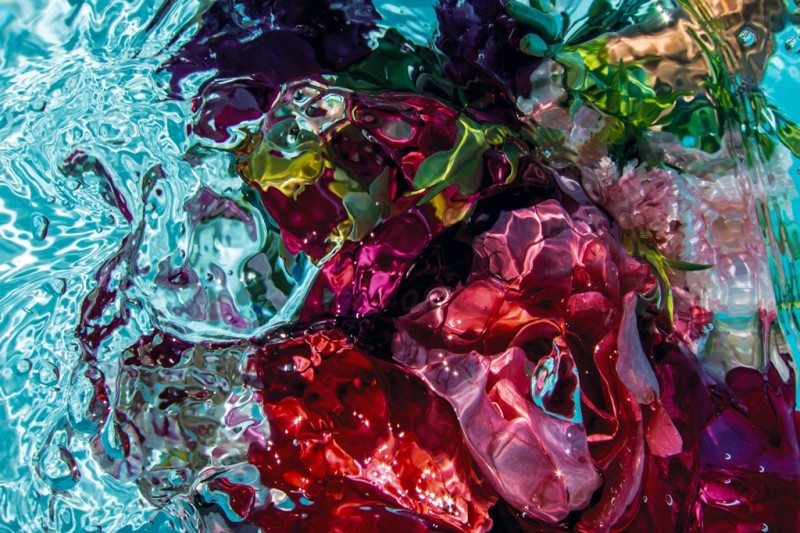 WWD: What about the concept fascinates you?
G.B.: I wanted to call the exhibition “Marie Antoinette” because you chop off the head of something so beautiful. I realized the flower is something very tragic. When you cut them, they’re dead. But when you put them in water, they start to come alive again. They have a rebirth.

WWD: Did you create the florals yourself?
G.B.: Yes, the flowers I picked myself. That’s why I spent so much time shooting them because I had to try different flowers, and I realized some flowers act differently in the water. With some, you need to put them in then leave them outside the water for a few days to let their color fade. It took two or three days to get the effect I wanted. The lighting also had to be perfect. I would start working very early, as soon as the sun was out, and shoot all day until the sun goes down. It was a very taxing process. I destroyed six cameras in one week because of the water.

WWD: I’m surprised the flowers stayed intact.
G.B.: Well, I’d take them out before they would come undone. I tried to clean the swimming pool of the flowers, but it’s a pretty complicated system, so I had to have someone else do it. I felt so bad for him.