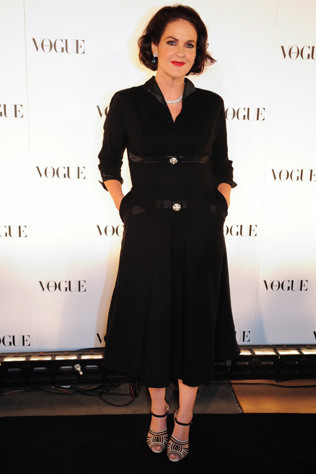 In May 2012 Kirstie Clements was unceremoniously sacked after thirteen years in the editors chair at Vogue Australia.  ETonline.com  caught up with Clements to hear some of the terrible practices that she observed in her time as Vogue editor.

Fashionmodels are often obsessive about their weight, as the skinnier models are often those who are offered jobs. However, being thin has become so desirable for models that they will often starve themselves and partake in the dangerous practice of eating tissues to feel full.

In her 25 years as a Vogue editor, Clements caught wind of these unhealthy practices and felt compelled to expose the unflattering truth about the fashion industry.

“It’s not every model, but there are certainly parts of the industry where you will see that girls have got eating disorders,” Clements said. “…They’re normally required to lose a great deal of weight to actually get into those sample sizes that you’ll see on those international runways, and that’s where you start to see trouble happening.”

As Clements emphasized, not all of the models partake in the unhealthy and dangerous practices of starving themselves in order to lose weight. Nevertheless, she reveals that she could usually tell by looking at a model whether she was healthy or not.

While it is the decision of the models to carry out such hazardous methods of losing weight, Clements believes that the casting directors and model agencies are usually the source of the problem.

“I think it’s essentially from the casting for the shows, whether that’s casting directors, designers, stylists, editors. There’s a pretty small pool of very influential people that dominate the fashion arena worldwide,” she noted.

“They’re the ones that makes the decisions as to which girls get cast, which girls are going to appear in their campaigns, and it stems from there, what you’ll see.”

While she was never physically approached by a model who revealed an eating disorder to her, Clements divulged stories of hearing others discuss the unhealthy eating practices, which often resulted in hospital stays.

As a member of the fashion industry herself, the former Vogue editor revealed that she experienced a deal of guilt while witnessing such practice.

“I did consider myself to be part of the problem, to tell you the truth,” Clements admitted. “I felt that that everybody was complicit in it. … As an editor, as a woman as a mother, I would make my judgment calls as the models passed me…as to whether I felt that they were too thin…and you had to make that call every single day, but yes, the industry is complicit in some of these areas, definitely.”