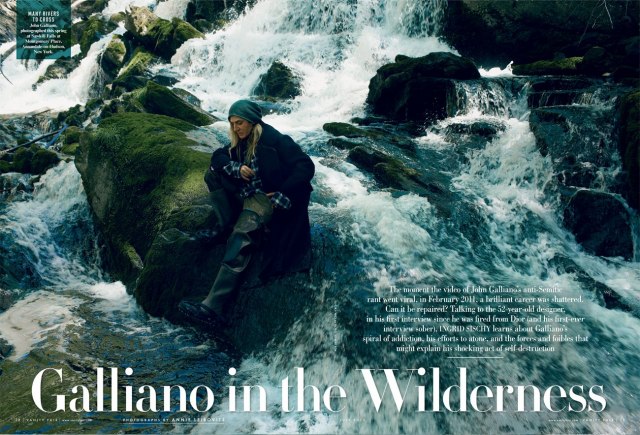 In his first interview since his 2011 firing from Dior, 52-year-old John Galliano sat down for a series of wide-ranging conversations with contributing editor Ingrid Sischy. Beyond his anti-Semitic rant, which shattered the designer’s career, Galliano and Sischy talked of the designer’s young life, including beatings and childhood taunting; his fashion education and the development of his eye; and how being “a slave” to his success led him down a path of addiction. Looking forward, Sischy writes of Galliano’s future: “He has begun taking baby steps to re-enter the world of fashion. My prediction: Get ready for his second act.” Read below to see a preview of the piece, available in full in the July 2013 issue:

Fashion designer John Galliano, in his first-ever sober interview, tells Vanity Fair contributing editor Ingrid Sischy that, in spite of his words, he is not an anti-Semite or a racist. “It’s the worst thing I have said in my life, but I didn’t mean it. . . . I have been trying to find out why that anger was directed at this race. I now realize I was so fucking angry and so discontent with myself that I just said the most spiteful thing I could.”

Galliano tells Sischy that he has been sober for over two years now and that theirs is the first interview he has ever given sober. Of his drinking and drug use in the years leading up to the outburst, Galliano says, “I was going to end up in a mental asylum or six feet under.”

Sischy reports that Galliano has spent the last couple of years learning about what he has to do to keep his illness at bay, facing up to what went wrong in his life, and taking certain steps to atone, including reading books on the Holocaust and Jewish history, meeting with Jewish leaders, and reaching out to members of the larger fashion community, including retailers, as part of the process of making amends and possibly returning to work.

Reflecting on his last two years of sobriety and struggles to come to terms with his words and actions, Galliano says that he knows “it sounds a bit bizarre, but I am so grateful for what did happen. I have learned so much about myself. I have re-discovered that little boy who had the hunger to create, which I think I had lost. I am alive.”

Galliano describes how he slipped into addiction slowly over the course of time, while continuing to work at a high level. “I never drank in order to be creative, or to do the research,” he tells Sischy. “I didn’t need alcohol for any of that. At first alcohol was like a crutch outside of Dior. Then I would use it to crash after the collections. I’d take a couple of days to get over it, like everyone. But with more collections, the crash happened more often, and then I was a slave to it. Then the pills kicked in because I couldn’t sleep. Then the other pills kicked in because I couldn’t stop shaking. I would also have these huge bottles of liquor that people got for me. Towards the end, it was whatever I could get my hands on. Vodka, or vodka-and-tonic. Wine, in the belief it would help me sleep. Wrong. I did manage to stop the voices. I had all these voices in my head, asking so many questions, but I never for one second would admit I was an alcoholic. I thought I could control it.”

“What had started as self-expression turned into a mask,” Galliano says. “I lived in a bubble. I would be backstage and there would be a queue of five people to help me. One person would have a cigarette for me. The next person would have the lighter. I did not know how to use the A.T.M.”

Galliano tells Sischy he was aware on some level that he had a problem, especially as he began to lose days to bouts of drinking. “Not having washed, I’d be covered in sores and humiliated,” he says. “I had the tremors. I wouldn’t sleep for five days. I would go to bookstores and get some self-help books, but I was in denial. I’d throw myself back into the gym. I’d be careful about what I ate. And, of course, the whole cycle would start again.”

Sischy reports that Galliano’s bosses at LVMH (Moët Hennessy Louis Vuitton), the parent company of Dior, confronted him on at least two occasions shortly before his downfall. First, Sidney Toledano, C.E.O. of Dior, took Galliano to lunch and said he needed to get help. According to Sischy, Galliano turned the tables and suggested that Toledano should change his diet and eat more healthily. The second confrontation occurred when Bernard Arnault, chairman and C.E.O. of LVMH, and Toledano told Galliano he was going to die if he didn’t do something about his problem. In response, Galliano tore off his shirt to reveal a gym-toned torso and asked, “Does this look like the body of an alcoholic?” Other friends told Sischy they wanted to intervene, but that in the end no one wanted to betray the designer, and that after a drinking binge, he’d seem fine again.

All told there were three separate accusations of Galliano’s having made anti-Semitic tirades. Galliano reiterates that he does not remember the events of the night in 2010 when his remarks were videotaped, explaining, “When everyone came over to tell me that I had done these terrible things, I was walking round and round and round not really knowing what had gone down. My assistant told me about the video. When I saw it, I threw up. The feeling was like I was about to take a step out onto the street and a bus or truck whooshed past me and the blood was drained from my legs. I was paralyzed from the fear.”

Galliano tells Sischy about his admission to an Arizona rehab facility on March 1, 2011. Here staff confiscated pretty much everything he brought, including the Keith Richards memoir, Life.When he was allowed his first two-minute phone call, he called Bill Gaytten (who had stepped in as creative director of the John Galliano label), just before the Galliano fashion show began in Paris, hoping to tell the models what they should be thinking as they walked down the runway. The call did not go well. “Bill said, ‘Do you realize what you’ve fucking done?,’” Galliano recalls, “and I said, ‘Kind of.’ But I still didn’t. I couldn’t say yes. I just couldn’t. And those were the last words we shared. That’s someone I’ve known for 30 years. Even now I’m still learning every day how many people I hurt.”

Linda Evangelista was the sole friend to make the trek for Galliano’s first visitors weekend. “I just didn’t want that weekend to go by without anyone reaching out to him,” she tells Sischy.

A few weeks into Galliano’s recovery, Kate Moss contacted him and asked him to design her wedding dress, something they had discussed when he was still at Dior. Galliano tells Sischy he felt it was a gift: “Creating Kate’s wedding dress saved me personally because it was my creative rehab. She dared me to be me again.” Moss describes the gown as “absolutely gorgeous, a diaphanous 1920s-type dress, romantic, with gold sequins in the shape of the phoenix—as if he was saying he would rise from this.” She tells Sischy that “when my dad gave his speech he thanked everyone and then he referred to the genius of Galliano, who made his daughter’s dress. Everyone stood up and gave John a standing ovation. It was the most moving thing, because suddenly John realized he wasn’t on his own.”