In the middle of the week when temperatures are still high in the thermometers there is one place where everyone would like to be : the beach. I selected six of the most unusual of them, so you can enjoy a comfortable, if not, then at least a pretty gallery of pictures.

Sand is probably the first thing that comes to mind when thinking about beach. However, this is not the case with the Panjin Red Beach in China, which is, actually, red, and not covered in sand at all. Such phenomena is caused by a type of sea weed Sueda. It starts growing during April and May, then stays green during the summer, but starts turning vividly red in autumn.

The Red Beach is located in the biggest wetland and reed marsh in the world, and actually hosts the most completed ecosystem that can be found: the area has become home to more than 260 kinds of birds and 399 kinds of wild animals. You can find the endangered Crown Cranes and Black Beaked Gulls there, which is why the area is even called “home of the cranes”.

In order to keep the whole ecosystem safe, the area was granted state-level protection back in 1988. Even though most of the Red Beach is closed to the public, there still is a  small section that’s open for tourists. One of those places that are hard to believe really exist!

According to British newspaper Daily Mail : ” Mr Ventura, 34, from Puerto Vallarta, Mexico, explained: ‘The beach itself was most likely formed prior to the First World War since the Mexican government had been using the islands as target practice. These controlled bombings have been said to have formed numerous caves and other unique rock formations on the Marietas Islands.

‘It is believed that the Hidden Beach was created as a result of these factors combined with the erosion of the rocks surrounding it due to the local weather conditions.”

Today this extraordinary desert and, most importantly, clean beach in Mexico welcomes tourists from all over the world. The organizers of tours in one voice declare that such an influx of tourists, which is observed the last two years, Hidden Beach has never seen in the history of its existence. “‘Without social media, the hidden beach would just be another beach waiting to be discovered by the world. This beach became famous around the world through Twitter, Facebook, YouTube, Tumblr, Pinterest, Instagram, you name it.”
– said Ventura Osorio, Chief Officer for organizing tours.

To get to the beach, which was renamed in Playa De Amor, which translated from Spanish means “Beach of Love”, you can by swimming through a short tunnel. The Marietas Islands are a Natural Reserve protected by the Mexican Government and in order to visit the hidden beach, visitors must have a permit. 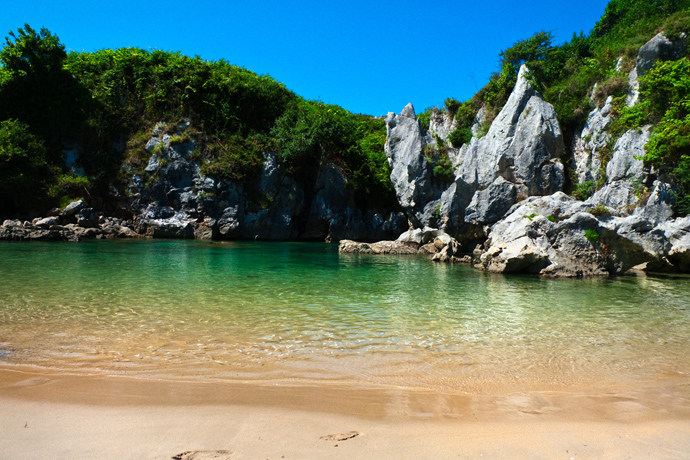 Playa de Gulpiyuri, not far from Llanes, a town in the north of Spain, is considered one of the most unique beaches in the world. To think that it is surrounded by hills, cliffs and narrow caves, which seeps through the ocean waters of Biscay.

Vegetable meadows be a substitute for the missing view of the bay, which is just 100 meters away. Salt water gives a touch of diamond, which is especially colorful look at the background of the wild untouched nature.A

green and lush landscape, more reminiscent of Britain or Ireland that the Spanish Mediterranean coastline.

Of the minuses – a huge flow of tourists. Therefore, it is advisable to check with the local people, what time of day is just calmer. The beach is a protected area and is considered Spain’s heritage. 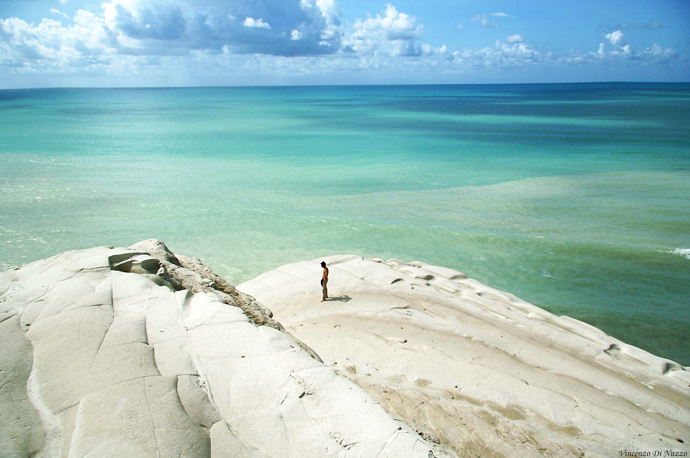 ” The Sicilian shore just several miles away from the famous Agrigento feature the stunning white rock formation called ‘Scala dei Turchi’.The 3 km long line of the shore between Capo Rosello and Punta Grande features sandy beaches under white gray limestone cliffs.Somewhere in the middle of the shore the rocks get pure snow white colour and descend rapidly to the sea blocking the shore passage. The thousands of years of winds uncovered the layers of marl resembling the giant staircase by which one can get atop to the promontory. According to the tradition the villages located far above the cliffs were safe until the barbarians found the way to climb these rocks up. The invaders could be Saracens, Arabs, or Berbers but to the local people all were looking similar and called simply the Turks. Then, the unfortunate white rock got the name Turkish Steps – Scala dei Turchi. ”

Here you can sunbathe and enjoy the views of the seas, read and take photos, wander barefoot through the limestone stairs and meditate, whatever you want. The long sandy beach, crystal clear water, wonderful climate and location – just an hour’s drive from Palermo. 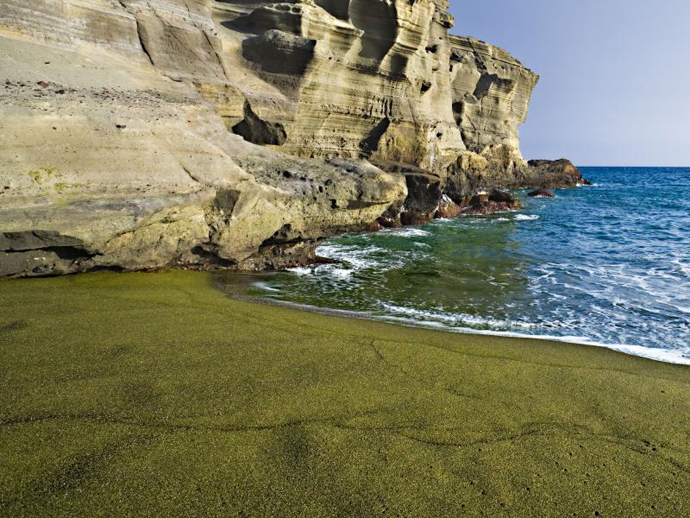 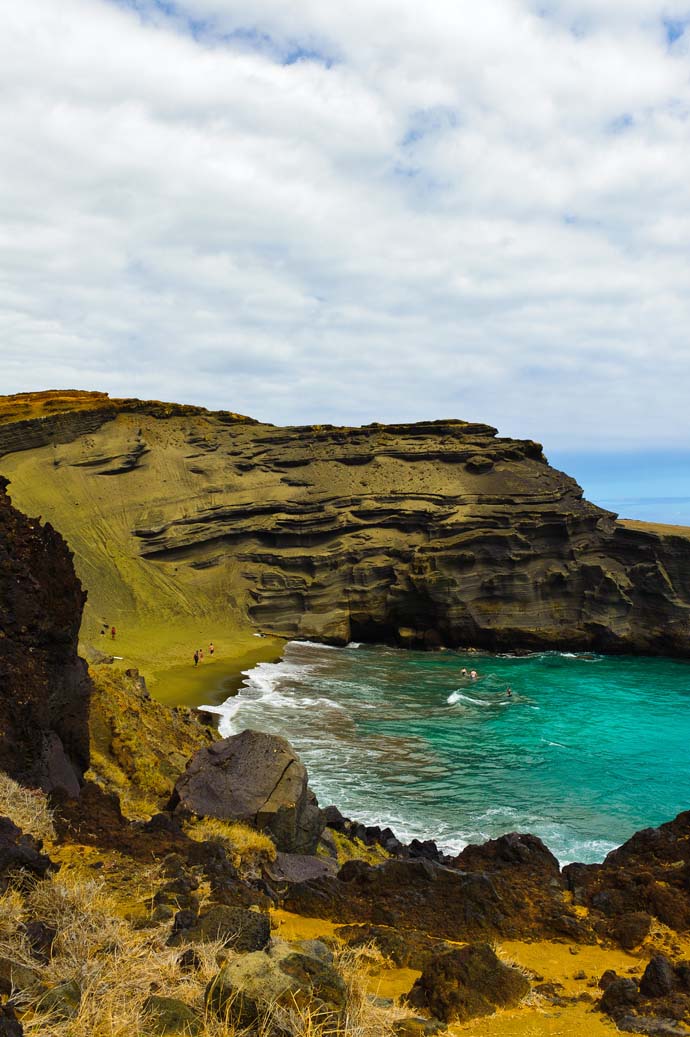 Green beach of volcanic origin, which is at the southern tip of the island of Hawaii, has received the appropriate name for a reason. Take a look at the sand, which, instead of the usual brown color has a rich olive hue. The green sand gets it’s color from olivine crystals created from eruptions to a dormant volcano years ago.  By the way, blowing sand along the beach… is strictly prohibited.

Papakolea beach is surrounded on three sides by cliffs and only the fourth is open to the Pacific Ocean, which is known for powerful surf.

Bermuda’s sand looks pink. Is that true? Yes! So why do the Bermuda beaches have pink sand? Red tiny organisms grow under coral reefs and die on the ocean floor. These along with bits of corals and shells get washed up to the shore, get mixed with sands and create a pink hue. The famous pink beaches year after year amaze tourists coming to Bermuda.  All along the fine shores you can find beaches bathed in pink sand, making the already poetic scenery that much harder to resist. They are located in the interval between two bays – Horseshoe and Warwick-Long. Some of these beaches are surrounded by coral reefs. The reefs are generally visible above the water surface particularly during low tide.The waters here have the same unusual color, ranging from turquoise and blue, emerald ending. Local people believe that the best time for a holiday in Bermuda is from April to October.