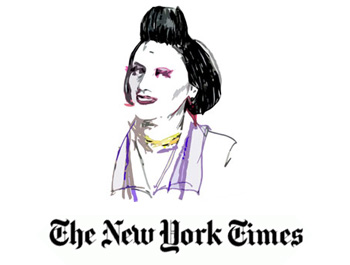 The fashion industry is broken in more ways than one: runway shows don’t match retail expectations; designers can’t keep up with demand; and customers can’t buy a coat in winter. So who’s to blame?

I WAS CHATTING WITH THE HOT young London designer Jonathan Anderson, marveling at how in just three years he had matched his transgender frilly men’s wear with the addition of his intriguing women’s collections.

“What’s that?” I asked, looking at a spread of drawings on the wall of his studio-cum-workroom in London’s down-at-the-heels Dalston neighborhood. (Think: East Village.)

Resort? Already! This guy has been in business only five years and has just 12 people in his studio. Does he really have to join the fashion treadmill, churning out more than four collections a year? A treadmill it is, as Alber Elbaz of Lanvin said with a sigh recently, before his men’s-wear show: he used to go on exploratory trips and hang out in downtown galleries, trawling for inspiration for his shows. But with the number of collections now doubled, there is no time to do much travel beyond the virtual kind.

If we accept that the pace of fashion today was part of the problem behind the decline of John Galliano, the demise of Alexander McQueen and the cause of other well-known rehab cleanups, nonstop shows seem a high price to pay for the endless “newness” demanded of fashion now.

The strain on both budgets and designers is heavy. And only the fat-cat corporations can really afford to put on two mega ready-to-wear shows a year, or four if you add two haute couture shows, or six if you count men’s wear. Resort and prefall push the number up to eight. A couple of promotional shows in Asia, Brazil, Dubai or Moscow can bring the count to 10.

Ten shows a year! If you knock off the holiday season and the summer break, that means a show nearly every month.

But who needs more fashion and is gagging for yet another show? And how can designers cope, given that even the prolific Picasso did not churn out work like factory-baked cookies?

It is not just creatives who are under pressure. We editors might love, love, love! a fall collection, but before it is even delivered to American stores in August for our readers to savor, fashion is on to the next big thing. (Retail shipping dates vary in different international cities.) A round of resort shows starts during the early summer months, over a six-week period. There might be new ideas, simpler, more wearable styles or even a negation of what went before. But not to worry! The fall collection will be gone from the stores in approximately two months, with unsold pieces we had raved about hanging forlornly as markdowns.

Photographs By Yannis Vlamos/Gorunway; Gianni Pucci/Gorunway; Filippo Fior/GorunwayRunway looks from the fall collections that will be photographed by magazines but most likely never find their way to consumers, from far left: Gareth Pugh, Alexander McQueen, Dolce & Gabbana, Thom Browne, Versace.

For all the promotional excitement attached to the international collections, it is the resort or prefall lines that are on the shelves for close to six months, while the so-called main line is in and out in about eight brief weeks.

How to make sense of this endless rush for the new when there are no longer any simple markers, like seasons? During the summer, when you are looking for a breezy maxi dress, the fall wool coats are hanging on the rails. Come early November, they will have vanished in favor of resort, which used to be called cruise, as if everyone hopped on a boat to the Caribbean with the first autumn chill.

Who are the crazy ones? The buying public demanding fashion now!, clicking online to buy during Burberry’s live-stream runway show months before the clothes are produced for the stores? The online shoppers hitting on special delivery pieces from Net-a-Porter that no one else will have — at least for the next two weeks?

Or has fashion itself gone mad, gathering speed so ferociously that it seems as if the only true luxury today is the ability to buy new and exclusive clothes every microsecond?

There is no doubt that online shopping has fed the craze for speed, because when you can’t touch the fabric or try on the outfit, the only emotion you experience is the excitement of the purchase and the thrill of beating everyone else to it.

Then there is a further, phony current of desire and longing, stage-managed by e-tailers and stores. They whip up excitement with their so-called limited editions, with the waiting list to buy a bag or the mapping out of objects to specific countries. I will never forget an oligarch’s wife telling everyone at a Ralph Lauren event in Moscow that she had taken a private plane to Cannes, in the South of France, to be the first in her country to get one of the designer’s “Ricky” alligator bags.

With the world’s press gathering in New York for the spring 2014 season’s official September kickoff — followed by London, Milan, Paris and then shortly thereafter for prefall — who can define the purpose of these different shows? Do we take the current international spring and fall presentations as an expression of pure creative imagination, as opposed to the more commercial collections that customers are likely to buy? When I started my editor’s job, so many moons ago, haute couture had just stopped being a one-to-one with wealthy clients and had become a laboratory of ideas. That now seems to be the role of international ready-to-wear.

Being a lover of fashion that stretches the outer limits of a designer’s imagination, I always favor powerful runway shows. But — full disclosure now — I don’t actually know or write much about the resort collections, other than when Karl Lagerfeld offered a midseason Chanel show at the Château de Versailles, or Dior was presented in Monaco. Since I already spend five weeks at a time hopping between fashion capitals, there is no way that I can spend an extra month in New York — even if that is where the majority of salable designer clothes are seen.

Chief executives mutter privately about the high cost of maintaining “freshness,” yet they know that showing resort in New York has become a second and vital tool in worldwide promotion and that those sales can make up around three-quarters of a brand’s annual income. The story here is also about control, with the work of the big fashion houses increasingly unfiltered by journalistic critiques or magazine spreads. The clothes most worn by people are the clothes least commented on by the press. The images now go directly to customers via online shows with advertising campaigns as a backup.

With the traditional six-month lead time on the delivery of international show content, designer collections can be outpaced by the so-called fast fashion chains. H&M, Topshop and Zara, or even Target and J. Crew, would have their versions for sale before the designer looks hit the stores.

So the pace of high fashion had to become equally frenetic. Both the management and the creatives are under constant, year-round pressure, especially the European designers who are obliged to show in New York, bringing in their teams, chasing the best models and replaying the tension and drama of yet another runway show. And this additional pressure is not just for one extra season, but twice a year — after resort comes spring and after that prefall — in a whirligig that seems to be spinning out of control.

Does this nonstop parade of what’s new have an upside? With global warming upsetting traditional summer and winter climates, and with a global market expecting clothes at once suitable to a warm and humid Singapore, the deep freeze of Russia and the upside-down seasons in Australia, all these fresh fashion shows each month could be seen as logical for customers.

But whoever said that logic and fashion make a good fit? As the fashion carousel spins ever faster, the concern is that, while the stream of newness never runs out, there’s going to be a good deal more crash and burn among designers in the future.

A version of this article appears in print on 08/25/2013, on page M291 of the NewYork edition with the headline: Something Is Wrong Here.