Post-show WWD sat down with Jacobs, Duffy and LVMH chairman, Bernard Arnault, to talk about what happens next. 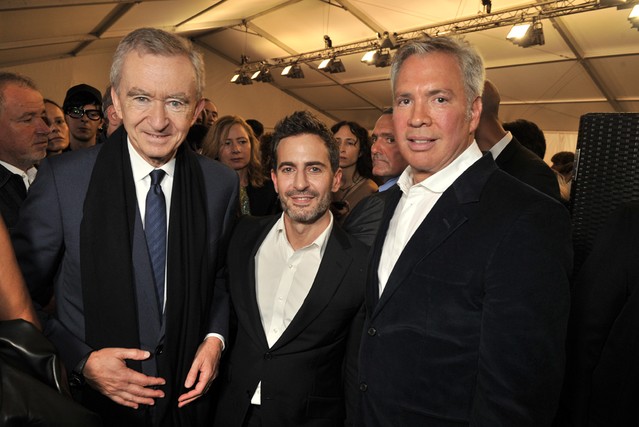 WWD reported on Monday that negotiations had reached a critical juncture, with the timing of Jacobs’ swan song still up in the air.

“Mr. Arnault left it to Robert and me,” Jacobs said. “Two weeks ago when I arrived back in Paris, he said, ‘The future of Marc Jacobs will require so much of your and Robert’s attention that at some point you will have to decide when you will make it your last show.’ But he left it to us to decide. And we had just — probably brought on by the [WWD] story and all the rumors — we just decided like [today].”

As for the retrospective mood of the show — mere coincidence, albeit a remarkable one. “I know people will perceive this in whatever way they want,” Jacobs said. “They will read into all sorts of things. The choices that I made were based on something completely different. This was never my intention to be the last show. The three of us, with Michael’s company, decided that [last-minute]. So again, whatever.”

Yet prior to that decision it was clear that Jacobs’ tenure was winding down. “We are at the point — and it’s our desire — that to continue and accelerate the growth [of the Marc Jacobs brand], it would be extremely difficult for them to do both,” Arnault said. “That’s the only [reason] that we decided together to concentrate on Marc Jacobs. I think this is a fantastic opportunity for both of them and for the group. Marc Jacobs may be the best and most known, successful brand in the U.S. It has already expanded all over the world, and we are going to accelerate the growth. The [level of] success we have in mind will require more and more work, more and more investment. We are going to provide that investment and commit with them. I think and I hope it’s the beginning of a fantastic business story and creative story. It’s already a fantastic creative story.”

Arnault noted how much the Marc Jacobs brand has grown under its LVMH stewardship over the past 16 years, calling it “a quasi-startup” at the onset of the relationship, doing about $20 million versus nearly $1 billion today. LVMH owns a controlling share of the Marc Jacobs operating company. The conglomerate, Jacobs and Duffy own one-third each of the trademark.

Arnault expressed “the utmost confidence” in Jacobs and Duffy. “We have an incomparable relationship,” he said, while lauding Jacobs’ talent. “I think Marc is one of, if not the, most talented people that I’ve ever worked with.”

Asked whether Michael Kors’ wildly successful IPO brought the issue to the fore, the three men all weighed in.

Jacobs: “Has Michael Kors been successful?”

Arnault: “We have some familiarity with the stock market.”

Jacobs: “Even with a cold, you have a good sense of humor.”

As for where the company will be listed, Jacobs shook his head. “I don’t know anything about these things. I’ve got hair and makeup tests to approve.”

With no such imminent tasks distracting him, Arnault confirmed that as an American company, Marc Jacobs would be listed in the U.S.

But first, there’s work to be done. “The first step is to put in place the organization, and to complete the business plan, which requires retail organization, retail investment and more products,” Arnault said. “These steps have already started. This will take time, maybe two or three years, to be completely in place.”

Strengthening distribution via the brand’s own stores is a major priority. “We’ve never had flagship stores. We’re always opening these little things,” Duffy said, the intent of his understatement plain. A case in point: The brand’s first store, a modest 2,500 square feet on Mercer Street in New York, hasn’t had a significant upgrade, nor even a major update, since it opened in 1997.

“It’s why we have to invest in the product, because retail means some investment,” he continued. “Whether we buy some buildings or rent some buildings, it’s a substantial investment.”

As an example of increased product range, Arnault cited the extremely successful Sephora makeup launch in August. He said Jacobs and Duffy would determine the specifics of additional brand extensions: “It’s mainly up to them to define the style that they want to project. Marc has his style. It’s just a question of expanding the range of products in his own style.”

Duffy pointed to work already under way. “We’ve started to reposition Marc by Marc, so we hired a new design team.” The hires of Katie Hillier as creative director and Luella Bartley as women’s design director were revealed last May; fall 2014 will be their first collection. “We’re going to start increasing the collection handbag business and we’re going to start working on distribution. We really have to redefine what we’re doing. It’s almost like bringing everything back to square one,” said Duffy.

Several times during the conversation, Arnault stressed not only the need for Jacobs and Duffy to be fully focused on the Marc Jacobs brand, but his own level of interest as well. “I am myself committed to the future of the company,” the business titan said. “I must say that the relationship with Marc and Robert for all the time that we’ve worked together was absolutely fantastic. And it still is fantastic.”

Asked about a piece published in WWD in which sources characterized the Arnault-Jacobs/Duffy relationship as complicated, he begged to differ. “It’s not complicated at all,” Arnault offered. “We agree completely together and we are the only shareholders, so there are no complications. It’s very simple.” – WWD.COM