Christian Louboutin, the master of the red sole shoes is launching his line of nail polish. 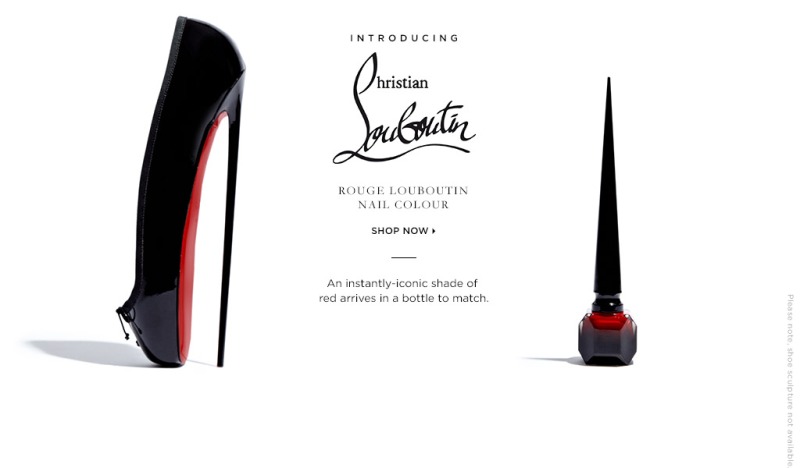 For those who don’t know , it is thanks to the red lacquer,that incidentally the iconic red sole of Louboutin shoes appeared.

According to the legend, in 1992, Christian Louboutin, while preparing his third collection, realized that his shoes didn’t turned out as bright and interesting as they looked in the sketches. He was particularly upset by the sole. Then the designer took a bottle of red nail polish from an assistant and, ignoring her attempts to resist, transformed the shoes on the spot. And just like this thanks to a nail polish was born the famous red sole of Christian Louboutin.

It is therefore not surprising that the designer decided to be a nail polish, the product that marks his debut in the world of the beauty industry. Little bottles with sharp elongated caps similar to the high heels of his stilettos. First shade, Rouge Louboutin, goes on sale today for $50 , exclusively at Saks Fifth Avenue.

A long-wearing, chip resistant formula is highly pigmented with luxe, glossy color and UV protection to keep the color true. Two coats give the effect of 20 layers of traditional lacquer, with a brilliant shine. A custom-designed, patented triangular brush ensures precise application, while shorter bristles pick up the right amount of product, preventing air bubbles and ensuring flawless coverage.

On August 6, at Neiman Marcus, Bergdorf Goodman, Nordstrom and Sephora the same shade will be launched and on August 31 other shades will go on sale .