Carrie, Samantha, Charlotte and Miranda in a new “Sex and the City” movie? It looks like the girls are back. The rumors about a possible third film with the four inseparable friends are insistent especially after two of the protagonists, Sarah Jessica Parker and Kristin Davis, have talked about it on Twitter, immediately sparking the joy of many fans who would like to see them again together in a new adventure full of exuberant shopping spree and love affairs in exclusive locations.

After the flop of “Sex and the City 2,” the project of another film for the big screen seemed to have been filed, but to revive the rumors, after Jennifer Hudson has opened a crack, have been different gossip magazines, including the magazine “People”, which presented the conversation on Twitter of the two actresses. “@SJP Miss YOU XOXOXO !! <3,” wrote Kristin Davis (Charlotte). And Parker replied: “Me too you! Heard the news? X”. 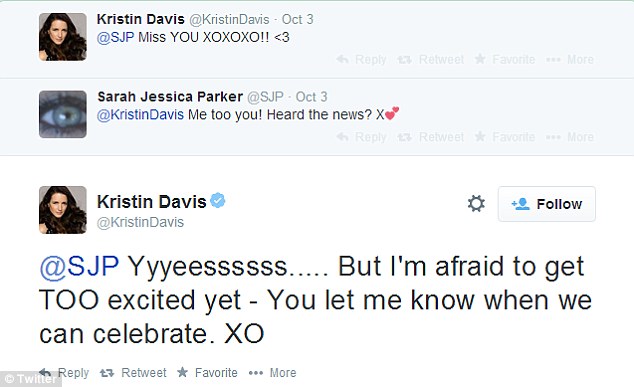 After reading the conversation, a fan then asked : “NEWS?!?! WHAT NEWS !!.” And SJP wrote: “That news zooming around. X sj.”. In a short time messages with the hashtag # SexandtheCity3 have multiplied.

Jennifer Hudson who played Louise from St. Louis Carrie Bradshaw’s personal assistant in SATC 2 (2008), during a radio interview at Dish Nation would have answered, “It could happen” to questions about a new chapter of the movie, stating also “Someone came to me to tell me about it. So, if they talk about it, it could happen. ”

Well one thing is sure we can’t wait to see the girls back together!!!

Leave a Reply to With Love... Andrea Cancel reply