It’s cover vs. cover in this roundup of the month’s fashion hits. Let us know which covers were your favorites and which one’s didn’t quite make the cut.

Both Saskia de Brauw and Milla Jovovich have an innately stylish vibe that sets them apart from other cover stars, so seeing their faces peering out from the newsstand is always a treat. On February’s Vogue Russia Saskia provides a bit of androgynous edge toPaolo Roversi‘s moody blue imagery in a serious yet sensual cover. Milla J on the other hand is looking resplendent in Saint Laurent Paris on Inez van Lamsweerde and Vinoodh Matadin‘s New York themed cover of the new Vogue Paris. 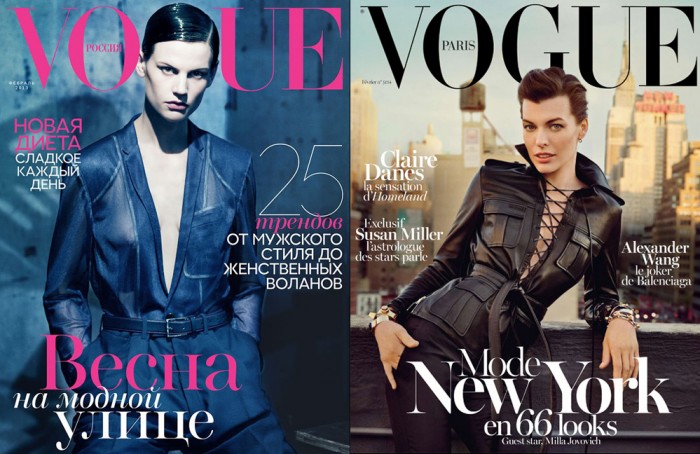 SASKIA ON VOGUE RUSSIA OR MILLA ON VOGUE PARIS – WHICH COVER GETS YOUR VOTE?

February brings double the Constance Jablonski for you to enjoy, with two very different Vogue covers. Vogue Germany‘s Alexi Lubomirski (New York: Management + Artists, Paris: Management + Artists) image offers a sultry vision of the Estee Lauder face, complete with dark lips and a retro chic bob worthy of a classic film siren. Patrick Demarchelier shows another side of Constance on Vogue China‘s springy cover shot, a simple portrait that is about as pretty as it gets.

BATTLE OF THE BLONDES

It is hard to find a flaw on Scarlett Johansson, but how does Elle UK‘s Rankin cover with the Avengers beauty compare to their one and only Anja Rubik? Both stars are clad in minimalist chic, both are looking phenomenal, but ultimately Anja’s cover is the more dynamic of the two. Naturally that means it is also the more difficult one to get your hands on, if you’re in London head on over to Selfridges to get this limited edition Elle cover.

LOVE Magazine‘s new ‘Clean Issue’ may not have debut just yet, but they really know how to amp up the anticipation. The teaser shots of models of the moment, Cara Delevingne and Edie Campbell by Sølve Sundsbø are elegant without losing any of LOVE’s trademark cool.

CARA OR EDIE – WHICH LOVE TEASER GETS YOUR VOTE?