Agent Provocateur has recruited the talents of the model Crystal Renn and Purple magazine’s founder and owner Olivier Zahm for its spring-summer campaign. 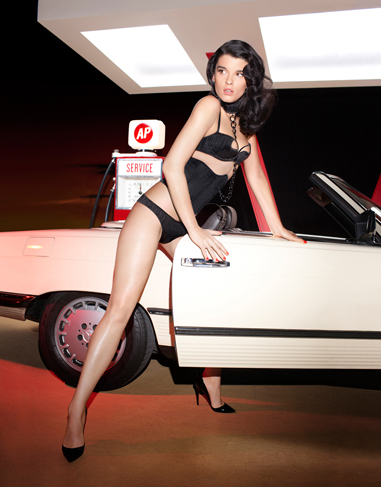 The images were shot in London on a set inspired by the Seventies gas stations in Ed Ruscha’s Pop Art and by Helmut Newton’s photographs.

“I wanted the Agent Provocateur girls to escape the city and the boudoir and go on an adventure,” said Zahm, who shot the campaign. “The gas station is a fetish, a place to have fun and stretch your legs after hours of driving, a place where you can accidently meet a handsome stranger.”

“The last season was quite serious, so I wanted spring-summer to be more fun, to be colorful and carefree,” she told WWD. “I was watching ‘Thelma and Louise’ and was inspired by the idea of driving across the U.S. in a Cadillac, Patricia Arquette in ‘True Romance’ and that whole trailer-trash thing.”

Shotton added that she has long been an admirer of Zahm’s work.

“He always shoots women really sexily, and Crystal is just so [Agent Provocateur],” continued Shotton. “She’s got a bit of that Hollywood glamour. She’s super sexy, and she has this way of moving. By just throwing her hips forward or arching her back just a little bit more, she made everything that much sexier. And she really went into character, too. Olivier and she spent a lot of time talking through who this girl was and at the end of their talk she was that girl.”

The images will be used in a brochure and in point-of-sale-material and will also appear in Purple’s spring-summer issue.